When Devendra Kohli, general manager (operations) at LTC Logistics, had to purchase trucks for his company three years ago, he tried a relatively new brand, the Blazo, the heavy-duty truck of Mahindra Trucks and Buses (MTB).

But the decision wasn’t an easy one. Unlike models from Tata Motors and Ashok Leyland, it didn’t have a long-running history to depend upon. Kohli, therefore, decided to do a comparative analysis of the three brands through a trial run that included running the trucks on the same route, with an equivalent amount of loading.

The Blazo, with its superior technology and lower cost per km, impressed him the most, said Kohli. Since then his company, which owns and operates more than 400 trucks of varied brands, now owns 40 units of the Blazo. This is despite the Blazo commanding a premium of Rs 100,000-150,000 over its rivals.

Albeit on a small base, MTB is emerging a formidable no. 3 brand in the heavy-duty truck market, where Tata Motors and Ashok Leyland have a head start of several years.

A steady climb in volumes has helped the company double its market share in the segment to 5 per cent in the first six months of the financial year from the year-ago period and it has now set its sights on a 10 per cent share in the next two years.

“Till a year back, of all the customers we reached out to, not more than 30 per cent would actively consider us. That has changed and 70-80 per cent is now considering us,” said Sahay. The share of such operators in the overall goods transport sector is 12-13 per cent.

At present repeat buyers account for more than 40 per cent of what the company sells every month.

“As a challenger brand, selling the first truck is the toughest,” said Sahay, adding that MTB counts 60-70 per cent of large fleet operators as its customers. Last week, MTB launched the Blazo X, the new improved version of its flagship model, which is Rs 25,000 costlier than the existing one and claims higher fuel efficiency and lower cost per km. The company will launch a range of intermediate commercial vehicles (ICVs) in January.

“After an initial struggle, Mahindra trucks have caught their buyers’ imagination,” said SP Singh, a senior fellow at the Indian Foundation of Transport Research and Training.

The company incurred a cumulative loss of Rs 9.2 billion in 2012-13 and gave itself three years to turn around the business. It launched the Blazo as part of revamping products and brand strategy and engaged Ajay Devgn as its brand ambassador. The efforts paid off. The heavy-duty truck business turned profitable in 2017-18. 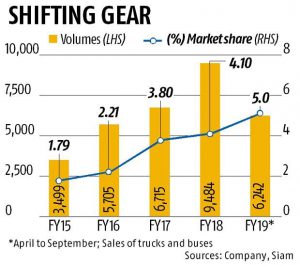 Sahay anticipates sales to get a spurt from the pre-buying that will kick in in the second half of the next calendar year as a run-up to BS VI emission norms.

V G Ramakrishnan, managing partner and managing director at Avanteum Advisors, said: “Once BS VI comes in, the market will get levelled in favour of relatively new entrants like Bharat Benz and Mahindra and legacy brands like Tata Motors and Ashok Leyland will find it tougher to protect their turf.”