Many businesses depend on their fleets to deliver products, transfer commodities between warehouses and go to distant job sites. To satisfy delivery standards, fleet drivers are frequently required to endure long travels and unpredictable driving schedules leading to driver fatigue.

The notion that drunk, drugged, and distracted drivers endanger themselves and others are pretty well established, but fatigued drivers, while often dismissed as a problem, are just as dangerous.

The conventional image of a fatigued driver is someone behind the wheel late at night, presumably on their way to or from a holiday, however, fatigue is more frequently an issue with individuals driving for work due to the number of hours traveled rather than the time of day.

What is Driver Fatigue?

To dig deeper, driver fatigue is frequently regarded as an underappreciated risk of being on the road. Drivers frequently confront long travels and unpredictable driving schedules, which can lead to circumstances in which they are driving when tired and drowsy.

Technology has the potential to significantly reduce the amount of fatigue-related accidents among fleet drivers. Vehicle features and ADAS solutions such as drowsiness and lane departure alarms, for example, are ideal examples of technology that can identify common drowsy driving habits and alert drivers to remain in their lane or take a break.

Advanced driver-assist systems (ADAS) are sets of technological technologies that help drivers with driving and parking. ADAS improves vehicle and road safety by utilizing a secure human-machine interface. ADAS uses automated technology, including sensors and cameras, to identify and react to nearby impediments or driver errors.

Some of the most common causes of driver weariness are: 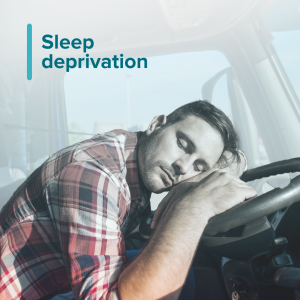 Sleep Deprivation: Most people need 7-9 hours of sleep per night to function optimally. The majority of drivers are unable to obtain so much sleep, resulting in driver fatigue.

Disorders of Sleep: Sleep apnea is a respiratory disorder in which a person’s breathing briefly stops while sleeping. These intervals of no breathing can occur multiple times during the night, leaving a person exhausted even after acquiring the required amount of sleep.

Substance Abuse:  Alcohol, prescription drugs, and illegal narcotics can all cause severe drowsiness in drivers, which can be exacerbated when drivers get behind the wheel already weary or under other sleep-inducing conditions. 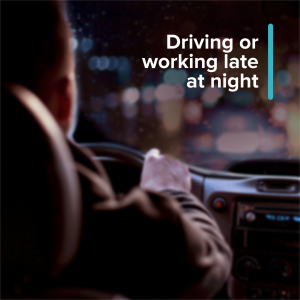 Driving or working late at night: Most people’s circadian rhythms predispose them to sleep late at night, which means their systems shift into a sleep-friendly mode more effortlessly during those hours.

Traveling frequently:  Travel can interfere with a person’s sleep cycle rhythms in a variety of ways. The well-known condition of jet lag is caused by changing time zones. Traveling within the same time zone, on the other hand, can have a significant impact on a person’s sleep clock. Traveling takes a physical toll due to stress and (in the case of air travel) dehydration. 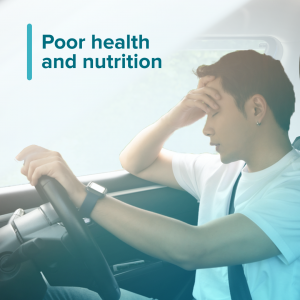 Poor health and nutrition:  A person who is in relatively bad condition or who suffers from poor nourishment (both of which are common issues for truckers) will feel exhausted more easily.

Pre-driving effort: Excessive physical exertion prior to driving can leave a driver feeling weary behind the wheel.

How To Prevent Driver Fatigue From Causing Accidents?

A problem of this magnitude necessitates a thorough plan to address it. The first step is to inform everyone involved – notably the drivers – on how to spot the factors that increase the risk of driver fatigue and how to mitigate them.