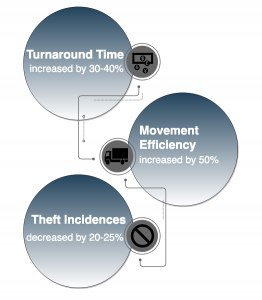 LocoNav is associated with one of the biggest cement manufacturing companies in India. The establishment has manufacturing plants at multiple locations, including the state of Bihar, Rajasthan, Haryana and Chhattisgarh. The company has been in operation for 30+ years and has multiple brands under its aegis.

The freight industry works to ensure smooth operation from source to destination, and for everything in between. A general cement transportation cycle works like this: 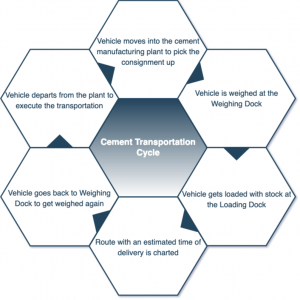 While this may seem like a seamless chain of events, there are certain hindrances that the industry encounters from time to time.

One of the biggest problems the enterprise experienced was mismanagement and misuse of funds by the bulk. The cargo would be dropped off to locations other than the specified delivery destination, drivers would make unscheduled stops and tamper with the load. The issue came into limelight when multiple unofficial deliveries were made. The consignments would leave from a district in Uttar Pradesh, destined to reach New Delhi. However, it was consistently found that the load would be dropped off somewhere in the Ghaziabad region and the vehicle would promptly travel back to the district. The company was unable to track the journey of their fleet, and ultimately incurred a huge amount of loss.

LocoNav needed to optimise the delivery channel and create a tracking system for the conglomerate to keep a watchful eye on their fleet.

LocoNav offered a systematic and authentic tracking platform for the management to stay abreast with each and every movement of all the vehicles in their fleet. To solve the issue of rampant fraudulent activities in the delivery sphere, LocoNav came up with a two-fold solution.

LocoNav enabled the concept of geofencing for the client, by generating a defined virtual perimeter for actual geographical areas, which were their points of interest. The platform, when deployed on the vehicles, allowed the administrator to set up triggers. Therefore, as the vehicle entered or exited from the demarcated lines, the administrator was notified immediately.

LocoNav Geofence utilises latitudes and longitudes to define boundaries. This was of immense help to the cement manufacturer to get instant alerts whenever a driver broke from his route. The administration was thus able to determine that the deliveries never actually reached New Delhi.

LocoNav established a detailed dashboard to manage all shipment-related activities of the organisation. The dashboard consisted of salient features under different tabs such as –

Unsuccessful Shipments played a pivotal role in LocoNav’s quest to help overcome exploitation of resources and prevent monetary loss for this cement business group. The dashboard helped the company locate and identify rogue drivers and pinpoint the middlemen. Along with that, unauthorised deliveries to Ghaziabad were caught on record with the aid of this feature.

The client was able to endorse expedited deliveries and time-sensitive shipments as the issue came under control. LocoNav empowered the organisation with absolute transparency and authenticity within the supply chain ecosystem. Eventually, customer service improved and the management was able to streamline their operational process.