NOIDA: Trucks parked in Noida because of a ban on entry of heavy vehicles to Delhi should not have been allowed to enter Noida and Ghaziabad too, city-based environmentalists have said, pointing out that the twin cities are equally polluted as the national capital.

The Environmental Pollution (Prevention & Control) Authority had restricted the entry of trucks to Delhi till November 10, which was extended to November 12 after the pollution levels refused to subside. The environmentalists fear that when the restriction is lifted and the trucks come out on the highways, it will not only add to the pollution but also create a traffic mess on the Noida-Greater Noida Expressway.
Traffic police officers said at least 100 trucks are currently stranded in Noida, waiting to enter Delhi. The trucks have been stopped at the exit point of DND flyover and are parked on either side of the Noida-Greater Noida Expressway.

Only those heavy vehicles that are ferrying essential items have been allowed to pass and enter Delhi. “Noida has been experiencing severe air pollution levels for the past several days. The trucks should have ideally been stopped at the Noida border so that the city did not feel the traffic pressure. We are making an appeal to the EPCA to consider this,” environmentalist Vikrant Tongad said.

On Sunday, Noida’s AQI shot up to 445 or the ‘severe’ category despite reducing to 388 (‘very poor’) the day before. Greater Noida’s AQI was 436 on Sunday, down from 447 on Saturday. In Ghaziabad, AQI stood at 440 on Sunday. Met officials in Delhi have, however, predicted some relief in the form of rain. “Minimum temperatures could go up to 15 degrees Celsius by Wednesday. However, the moisture content is increasing and this could lead to some light rain on Tuesday/Wednesday,” said a senior Met department official. 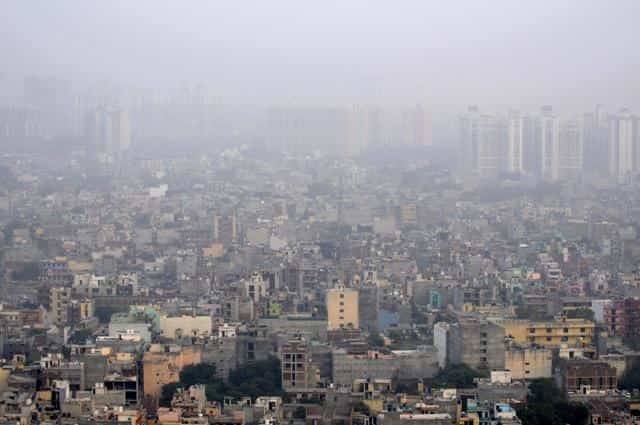 The ‘severe’ pollution levels prompted the district magistrates of Gautam Budh Nagar and Ghaziabad to issue an advisory to all schools on Sunday, saying outdoor activity of children should be restricted as much as possible. Schools are slated to open after the autumn break on Monday.

The parked trucks, which have eaten into much of the Noida-Greater Noida Expressway, had not caused congestion so far because traffic was thin over the past few days because of the festive holidays. On Monday, when schools and offices will reopen, the situation could be quite challenging for the traffic cops. “There were 30% fewer vehicles on the roads because it was a holiday week. But if the trucks continue to remain parked along the road, they could cause vehicular congestion on Monday,” SP (traffic) Anil Jha said.

Anil Singh, regional officer of UP Pollution Control Board, echoed the activists, saying trucks could have been parked at the Noida border. “Heavy vehicles parked in Noida could become a cause for pollution,” Singh said.